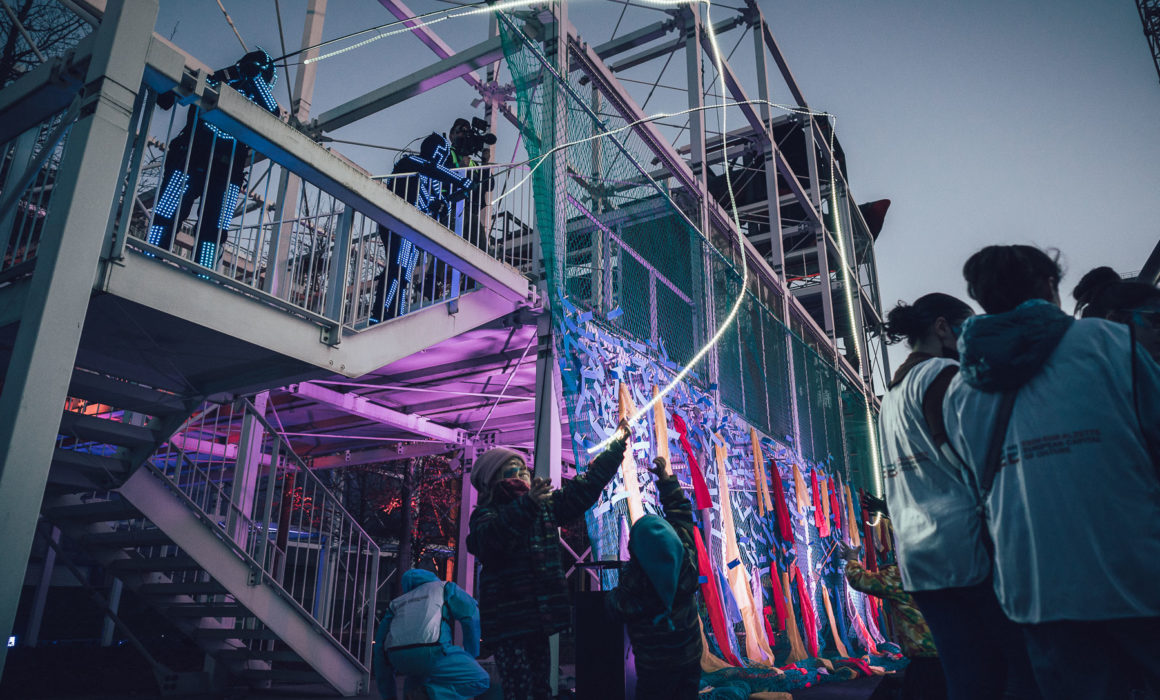 Esch-sur-Alzette, Luxembourg’s second largest city, was named European Capital of Culture 2022 and celebrated its grand opening on February 26. For the ceremony, which lasted several hours, the Esch region, together with our creative studio – and in the midst of the Covid 19 pandemic -, ventured into the future: culture was created by the whole region itself.

The Esch2022 REMIX Opening, conceptualized and directed by us, was the only one ever held in a European Capital of Culture in its nature, scope, interactivity and hybridity. The program items could not only be seen live, but could also be experienced via an interactive online livestream.

The numbers speak for themselves: 700 articles reported on the opening ceremony, 18,000 people visited the spectacle and 14,000 Internet users from 50 countries participated digitally in the Esch2022 REMIX Opening. How do you successfully create one of the biggest immersive experiences in Europe? Find out in our guide below.

A creative concept integrating a hands-on mentality and participation

A good creative concept includes a well thought-out, complex narrative to make an opening ceremony as immersive as possible – from its communication and integration leading up to the event. Visitors are not only entertained, they become co-creators. An immersive opening ceremony leaves a lasting impression on the city and its people.

For Esch2022, our team researched the most relevant particularities and biographies of the region and city. Culturally, historically and economically significant factors ultimately resulted in a narrative for the opening that the city could identify with as much as possible. At the same time, we deliberately left out gaps in the script to allow people in the region to participate in telling their own story by means of initiatives launched in advance and with riddles and tasks on the evening itself.

As a former steel industry location, Esch-sur-Alzette was characterized by manufacturing industry and the working class. In the meantime, however, not only has the University of Luxembourg moved its campus to Esch Belval, but the Luxembourg Space Agency is also based there. Today, the city has a new, diverse face. With the REMIX Opening we showed how promising the Esch region is. To do so, we invited the public to actively participate in a secret mission during the opening evening at various locations in the city and on the campus. The goal of the evening was to launch a metaphorical rocket with visions of the future from children in the region, remixing the future – in line with the motto of Esch2022. 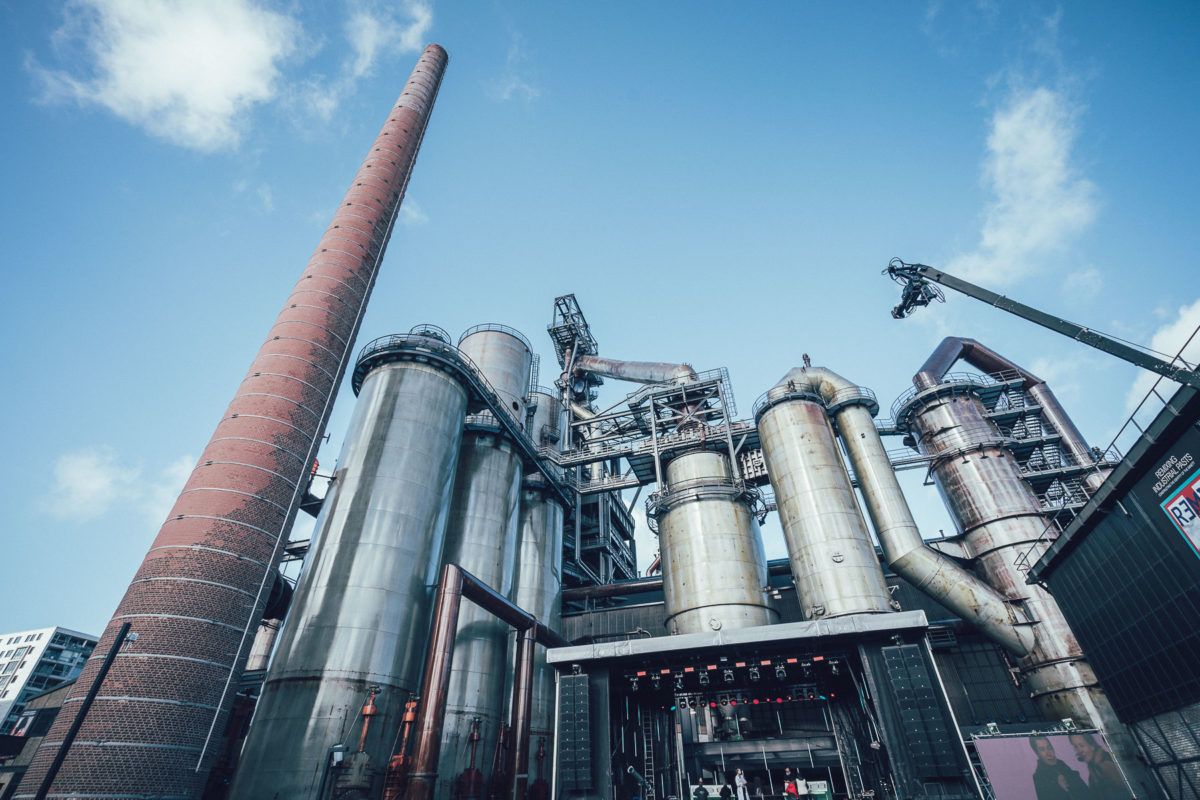 Development of a mascot

In order to vividly communicate the developed narrative, it has always been the practice of major events to create a character that acts as a catalyst for the story to be told. For Esch2022, we created a mascot called Bot-Bot, which was both lavishly 3D animated and appeared live on stage as a puppet. Bot-Bot fits the future vision of the opening ceremony and many, especially young, people could identify with him. For Bot-Bot, children were interviewed in advance to develop the most fitting mascot.

Immersion instead of flat entertainment

Immersive events are memorable for much longer and can permanently improve perceptions of a city and region. With just one event, long-term networks and cooperations can be created.

We therefore designed, produced and staged the opening evening with a focus on audience participation. All stages were choreographed to a story, while a playful scavenger hunt structured the experience of the visitors onsite. Special participation features such as polls and live interaction tools turned audience members into co-creators and narrators of their own story.

Their participation was the only way to make the event successful. We relied on different levels of engagement: Citizens were able to participate in various initiatives months in advance to help shape the evening or to help determine the course of their experience at the ceremony, both onsite and online. 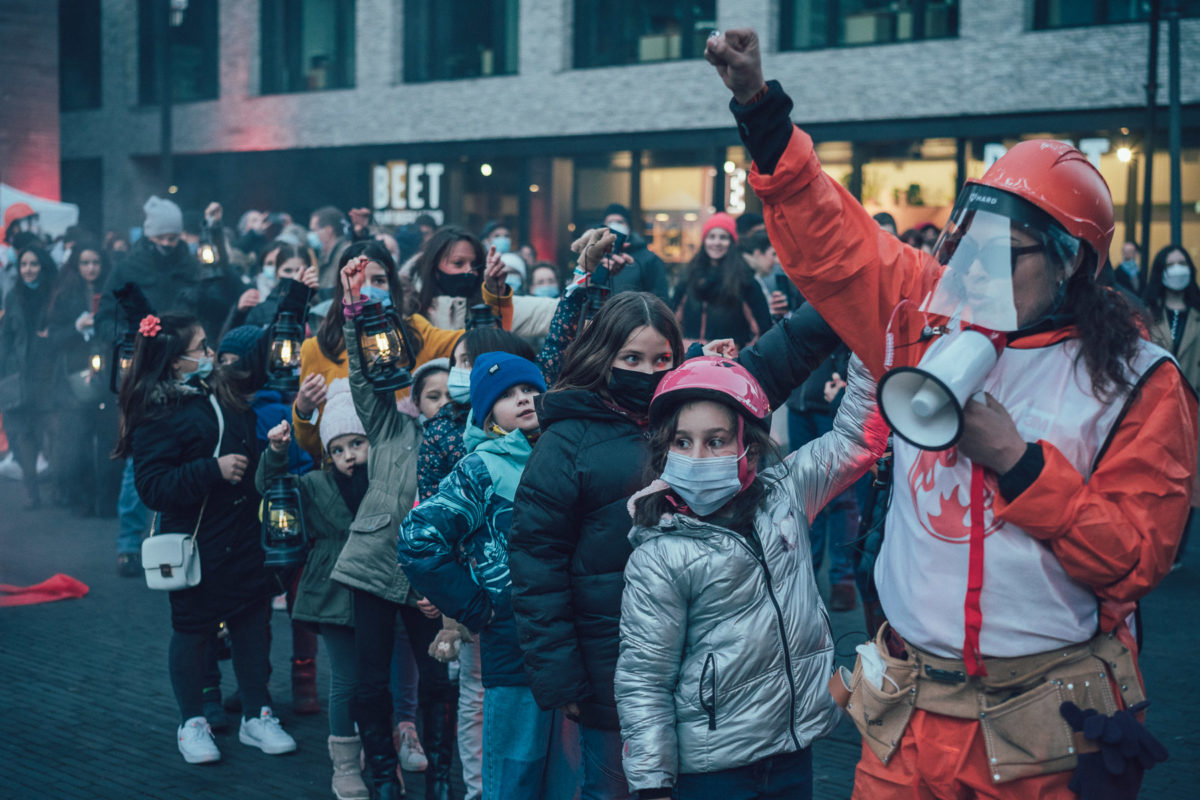 In order to get an entire region involved in an event of this magnitude, the target groups had to be integrated into the process at an early stage and in a sustainable manner. To this end, we developed the Esch2022 REMIX Festival, which laid the foundation for the ceremony’s extensive co-creation campaign in fall of 2021. Panel discussions, open rehearsals, workshops and projects led towards the grand opening over a period of months.

The Space Program was a large-scale project in collaboration with the Esch-based LUX Space Agency, where children and young people of the region could elaborate and submit their vision for the future. The Space Program struck a chord with the generation: 800 children and young people took part. The best visions of the future were awarded by the LUX Space Agency. The visions were sent into space on an AR rocket for the opening night finale. And because the program was so fruitful, an astronaut from the International Space Station even sent a video message from space at the opening.

Future Frequencies explores the sound of the future from the Esch region and across Europe. Under the direction of internationally established producers Frank Wiedemann and Matthew Herbert, musicians from the region developed new and Esch2022-specific sounds in a series of workshops, which were finally presented twice on the opening night as a cross-genre concert. More than 100 local artists performed an eclectic composition of their styles accompanied by an epochal light and video show. The sound of Esch2022 pulled everyone in: The concert hall, where big pop stars usually perform, was filled to capacity for both performances.

A city never stands still. This is also true for Esch2022 and was to be illustrated with this movement-centered initiative. Mainly kids and creatives of the region were involved to create recurring flash mobs with different movement sequences on the opening night, which was seen by thousands on site and sent digitally to the whole world. The movement sequences were explicitly designed to be accessible, inviting people to jump in and participate at any time, regardless of experience level or demographics. Thanks to an Esch2022 Mover’s Day in advance and collaborations with dance and theater creators, over 100 dancers uncovered just how much movement there is in Esch during the opening night.

From audience to co-creator

The visitors already became actively involved during the online registration and were assigned to four different teams by means of a quiz. Team Red Earth, Iron Furnace, River Alzette and New Horizons reflected the past and future of the region and guided each participant on an individual journey through the evening.

Using various activations such as riddles or tasks, they generated energy at what were known as co-creation stations, which were specifically designed and constructed for the opening ceremony. On their journey through the evening, the visitors got to gradually discover the whole story that our team had developed. The collected co-creation energy was instrumental in launching a large AR rocket as the grand finale of the evening. The final energy boost was provided by a joint action at all locations of the opening night. It was only due to the commitment of all visitors that the rocket launch was made possible – a level of interactivity that no other European Capital of Culture has offered yet. 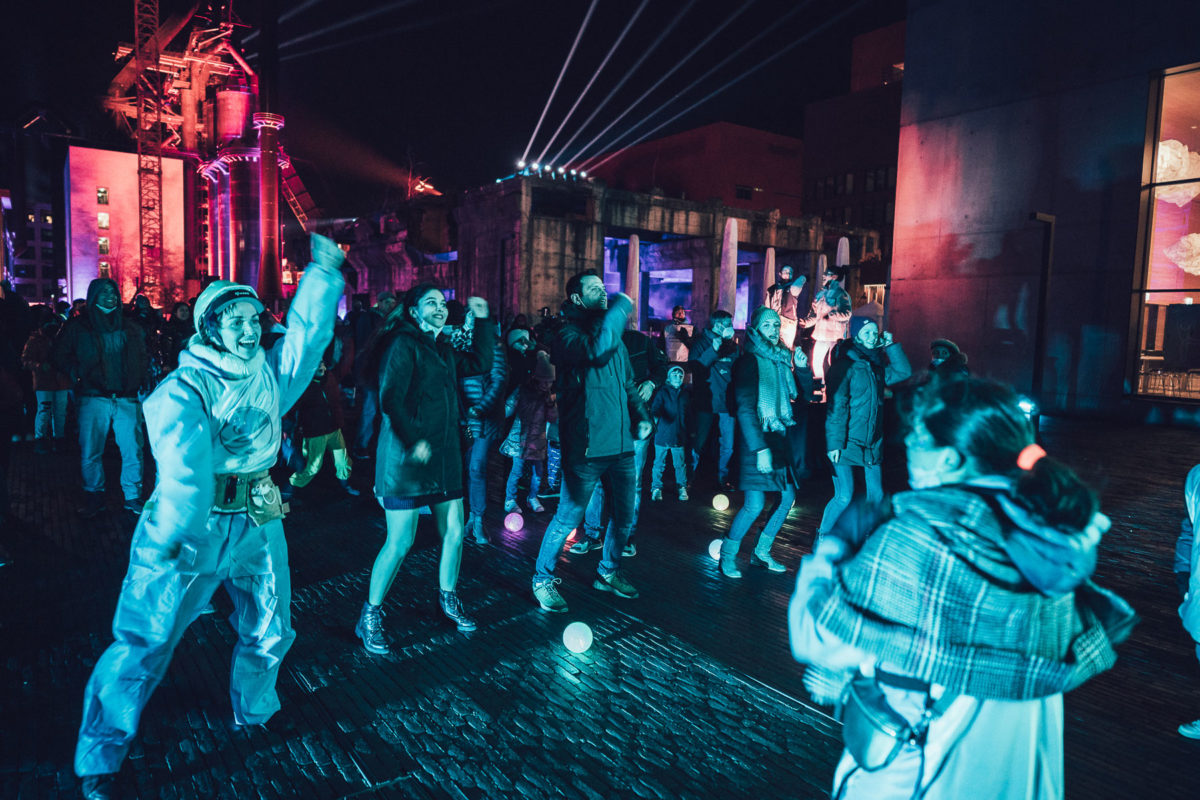 As tailor-made as the story was written, so was the implementation. We are always on the lookout for new ways and solutions to design an event of this magnitude in a future-oriented way, while supporting the experience in a technically and visually innovative manner.

We developed a multi-site concept for the diverse Esch region. The ceremony evening was accompanied by a show program on two main stages – one from the town hall in the city center, the other on the promising campus at the old steel industry site Belval. The “Mission Control” stage was set up in front of the town hall and welcomed the audience with an official opening program, but the show and audience interactions were also broadcast from the Belval campus – and vice versa. Thus, all visitors could participate in all the action and the current status of their generated co-creation energy for the rocket launch. On the large-scale Campus Belval there was not only another show stage and the Future Frequencies concert hall, but also Co-Creation Battery Units. These 5-meter-high totem-like constructions were set up at various stations, which animated the audience to generate energy by means of small tasks. 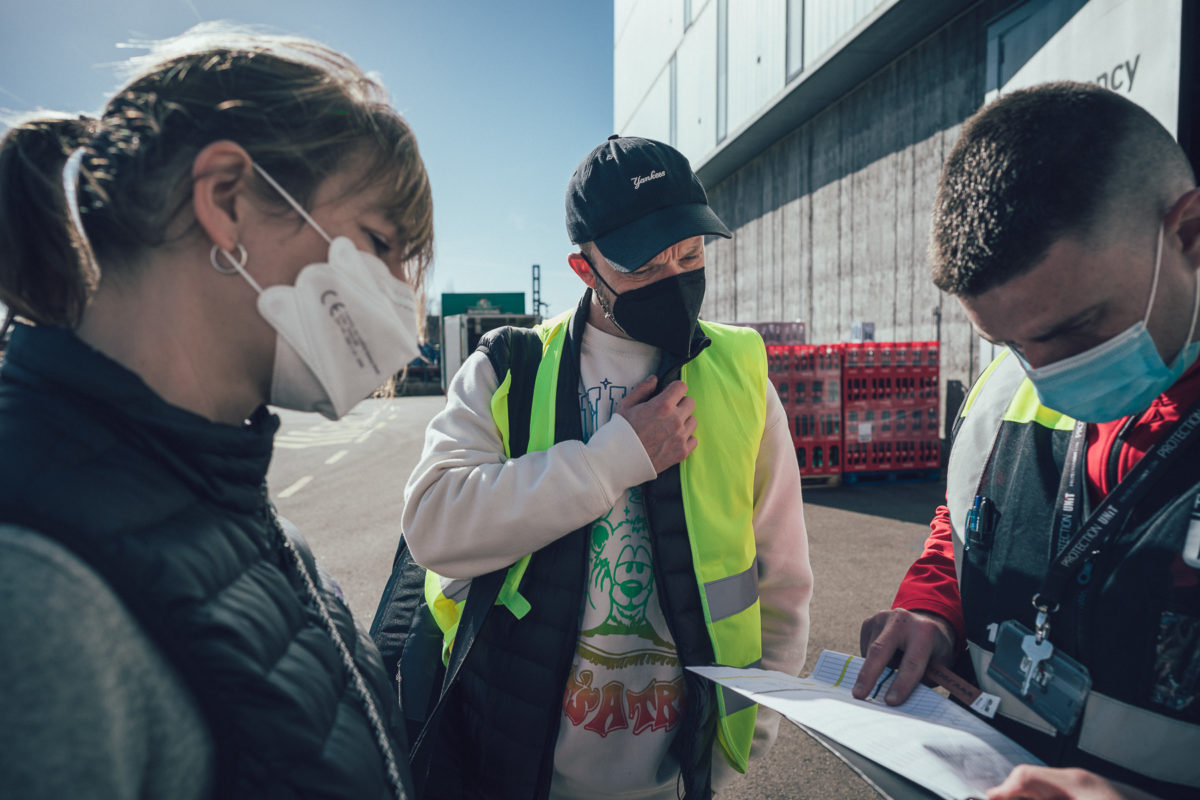 The organization phase for Esch2022 began 2.5 years before the actual event and was therefore completely influenced by the Corona pandemic. In order to still make a large-scale event possible, many factors played a role that were successfully included from the beginning. An expansion to three locations in the city ensured that the 18,000 visitors could move with sufficient distance. In addition, almost all program points took place open air and thus offered a significantly higher level of safety against infections. All indoor activities were carried out in accordance with hygiene regulations. In addition, interested parties were also able to participate in the opening digitally.

Projections on buildings only leave a lasting impression when they interact with the story. So our team created a brilliant AR experience from the video mappings on site, which also took the digital experience to the next level. The windows of the City Hall became battery displays that showed the current status of the co-created energy. At Campus-Belval, the former steel silos became a galactic scene of technical displays and a rocket, which in the end took off into the sky with an elaborate light show, literally transporting the children’s visions they had previously remixed into the future. 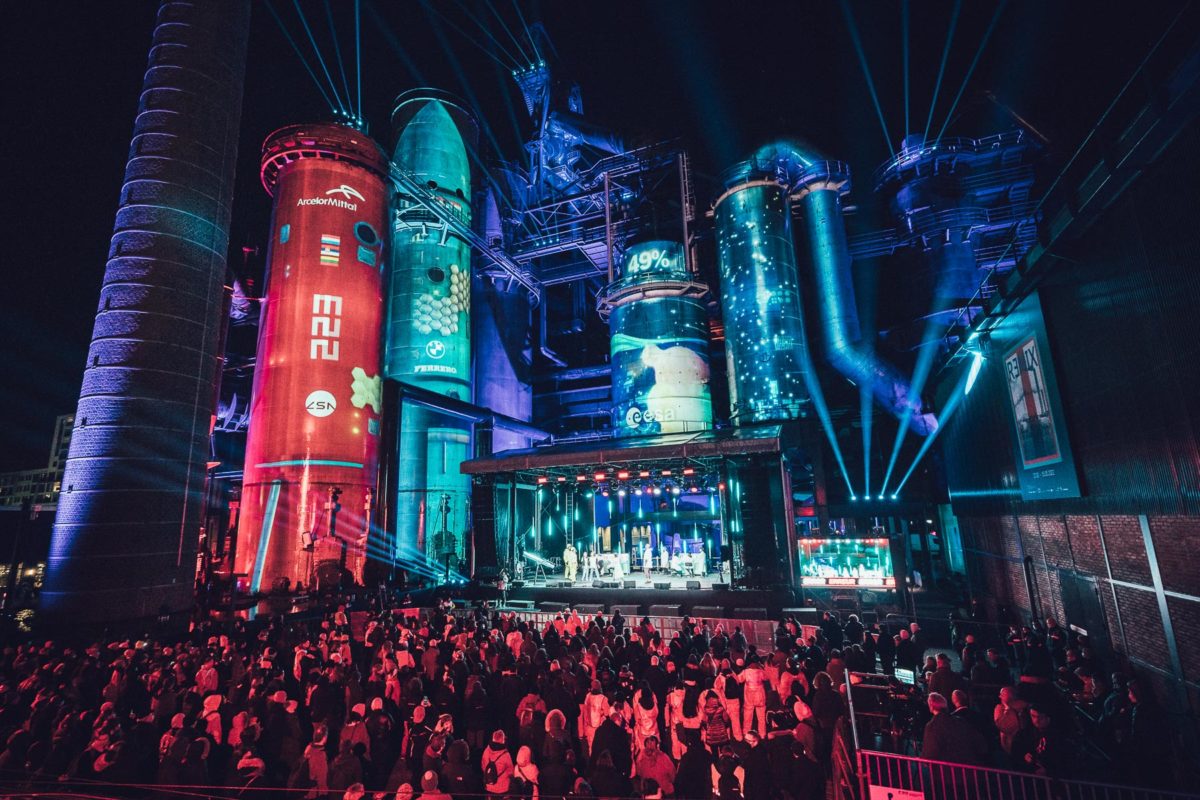 Hybrid events are the future

Hybrid events in the age of digitization and the pandemic are a contemporary way to make an event even more successful, accessible and engaging. The interactive livestream experience for Esch2022 proved this.

People from all over the world were able to follow the evening live online, and also influence the happenings on site and actively contribute to the co-creation. Participation through online polls and the use of emojis were accessible and effective activations to engage the online audience and let them decide the course of individual actions.

Tracking technology as a reward system

The visitors received digital wristbands. After completing a particular activity, they could scan their wristband and earn a digital badge on their participant profile. The more missions a person completed, the more energy was co-created for the grand finale. Each badge earned served as a reward for helping to complete the mission and inspired a desire for more.

A well-researched story with a futuristic outlook, the courage to leave just enough open for participants to interact, immersion on various levels, a technically tailored production, the innovative application of digital tools, and a brilliant finale are the recipe for an unforgettable experience, just like the opening of the Esch region as one of the three European Capitals of Culture in 2022. After the successful launch in Luxembourg, our creative studio is not planning anything less for future projects.